How To – Black and White

Honestly, I don’t do much portraiture, soooo… there ya go. 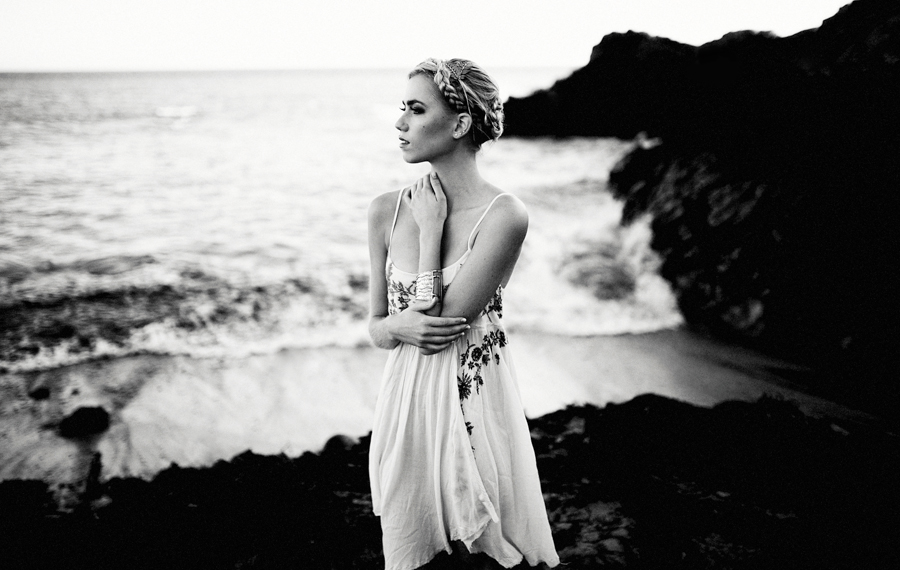 This was a shoot that I tagged along/assisted for, Ben Sasso did all the hard work, you can see his blog post about it here. From what little portraiture I have done though I can give you a couple of fail safe tips to begin with, then the editing part (which will be relatively detailed) gets more convoluted and subjective. I’ll also do my best not to be long-winded. Here we go.

First: Do everything you can to make your life easier later. Benj Haisch calls this “Photoshop in Camera” which I love. But even before you start posing, moving rocks, changing angles, and fixing flyaway hairs you need to be sure that the subject is how you want it to look. Being that this wasn’t a shoot I set up from the beginning I can’t tell you the hours spent before dealing with mood boards, thinking up a look, tracking down the right model for the job, emailing agencies, solidifying a trustworthy HMU(hair and makeup artist), and location scouting/checking for required permits, but I can tell you all of that stuff plays into getting that one shot you want. If any of those elements falls apart then you’ll have to make sacrifices in your image, and ultimately in your quality. These really have nothing to do with Black and White editing per-se but about planning any image. That being said, a good black and white image will only look as good as your planning, even though a lot of people treat it as a fix all for bad light (which can be true too).

Second: Know what kind of light exists where you’re going. Especially if you are paying a model, hmu, assistants, gas, time, energy, etc… You should see the time spent to pre-vision your shoot as an investment. Ben knew this was golden light that sprays up from the waves crashing on the Malibu cliffs and the styling/model/look/mood was meant for that light. If you can imagine a grungier model in ripped jeans in this shoot you’ll know just how stupid this scenario would look… Unless, that’s like, your thing, in which case we probably don’t hang out.

Here’s the SOOC shot: Ben had found a spot for her to be in the shade while the sun still hadn’t set but was tucked behind a cliff to her back. 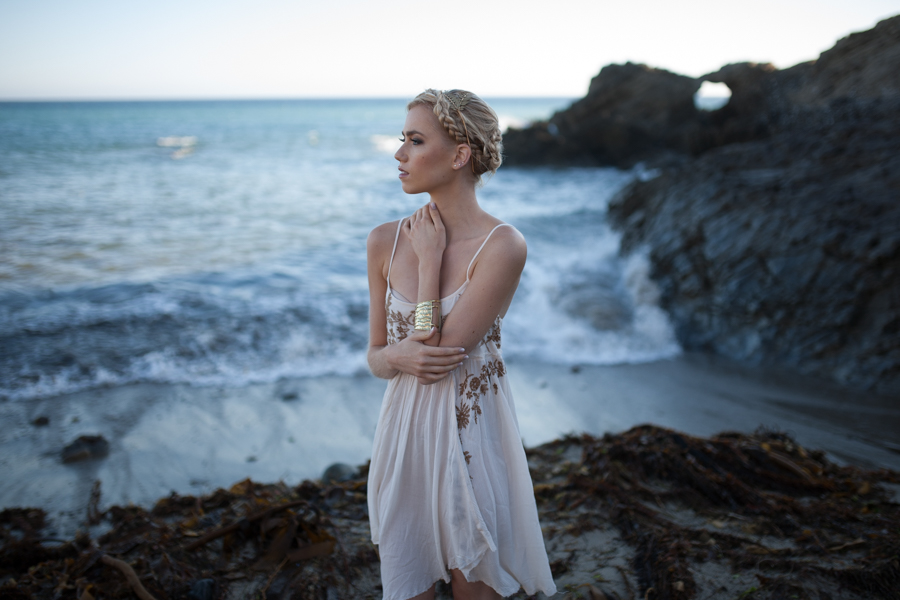 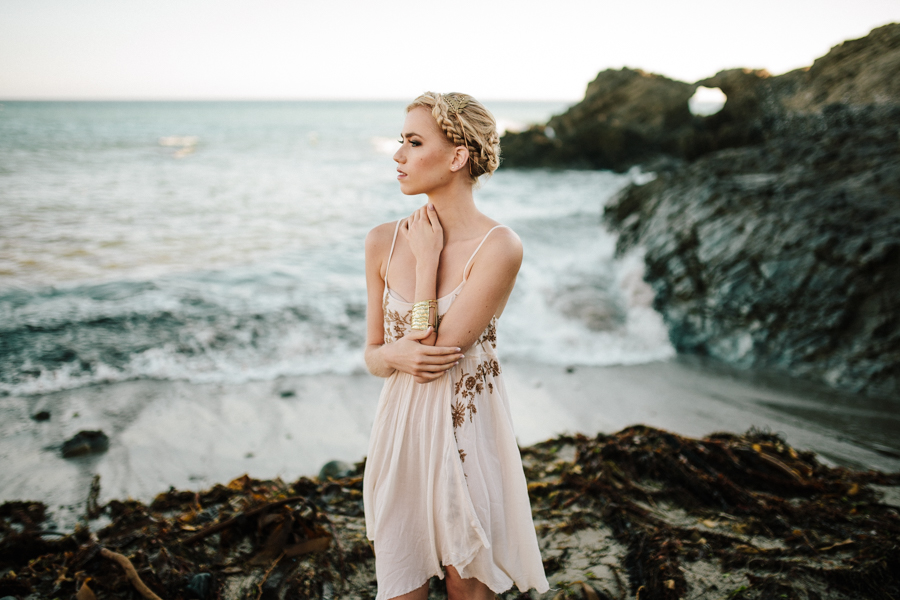 This image for me was nearly a toss, and honestly, if this were my client… well I probably wouldn’t be shooting at this weird angle with the cliff stabbing her in the back of the head, but secondly there are just a lot of distractions in this color image – so if this was my client chances are she would never see this image. Her skin tone and the light on the rocks to her right aren’t very well matched, the seaweed by her feet isn’t, hmmm how do I say, classy? I like my angle and the water behind but, hey give me a break, I was just in between assisting at this point, so there’s not much else to this image. And that’s mostly why I want to show how an image with the elements of light/look/location can still work out as a black and white image.

So, Third: on to Lightroom. I use the Mastin Labs actions for my black and white images almost exclusively. I used the Delta 3200 Medium Format for this image and got this. 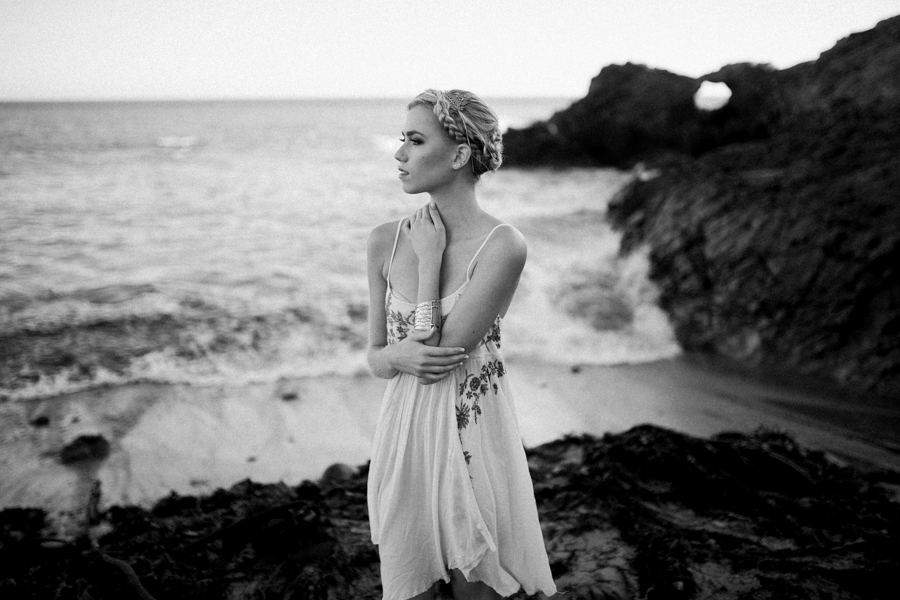 Which, meh, it’s flat, boring, kind of whatever. But I made some contrast adjustments, got rid of the grain placed by the preset, did a slight sharpening, bumped up the luminosity of skin tones (remember HSL and temperature still adjust the color information in the file, the BW is just a ‘filter’ on top of it so you can really do some powerful things to black and white if you mess with anything assigned to color) and then moved to Alien Skin Exposure which is my go to for adding grain, sharpening, and any tilt shift effects. From there I gave it grain, sharpening and also adjusted the contrast (it handles tones well too) and got this. 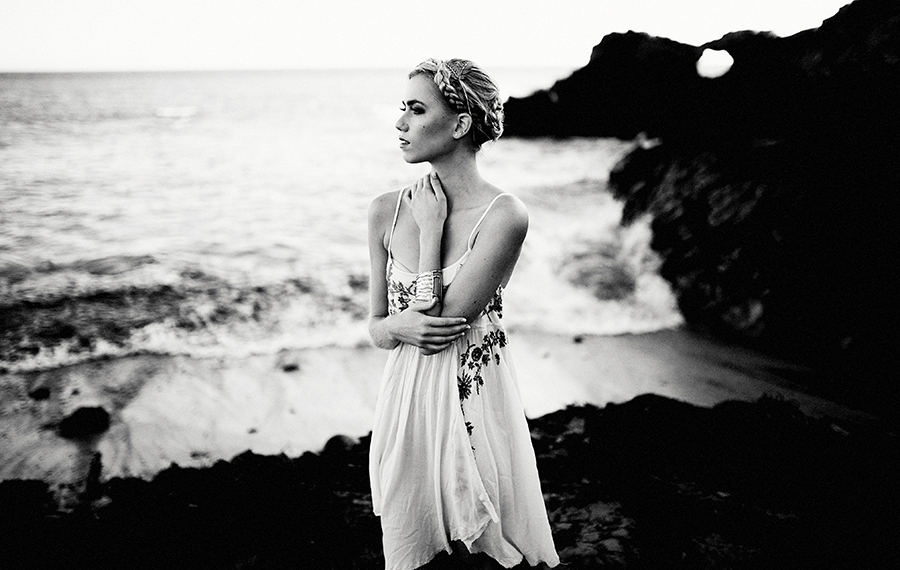 Hmmm. Now we’re getting somewhere. I export as a TIFF(if I know I want to do more specific retouching I’ll export as a larger uncompressed file for photoshop). Now came some of that obsessive stay-up-till-3am-getting-it-right stuff.

Fourth: I then went to my clone tool and got rid of some of the more distracting elements on the beach, some, not all, of her freckles and worked on making her bra disappear from showing. I was torn about the hole in the rock behind her, because I think it’s cool but it kept pulling my eye towards it so got rid of it too. Lastly I worked on her skin/tones using frequency separation, and that is a blog post that would take up equal if not more space to explain, which I could do, and leave a comment if you want something like that. It is essentially separating the tones of her skin from the details of it and allowing me to make adjustments independently on each of those layers (aka witchcraft). It’s crazy powerful and fun. I also will dodge tool on the eyes occasionally to make them pop.

This is the stage in the game where you as an artist need to make some choices like “do I leave her arm hair in the shot or edit it out” and “to liquify or not” etc… My rule of thumb is don’t make any changes that ruin what makes the image essential to you. I tend towards minimal retouching, but there’s a time and place for every Photoshop tool. Just don’t be a Photoshop tool. Hah, that’s a good one.

Anyways here’s what came from that.

It’s smooth like I wanted, she honestly didn’t need much skin help at all (part of that whole finding the right model/hmu combo) and the light fell exactly how it is supposed to. And yeah, there are other changes I might have made the longer I stare at this image, but that goes for any image, I’m always rediscovering edits I want to make, but I also love the process so it’s not torturous for me.

There you have it, how to – black and white.

P.S. After having Ben read over my post to make sure nothing sounded moronic, he helped me with an issue I was having with Photoshop’s sharpening my images when I resized. If you’re having that problem when you resize an image to fit on your facebook or blog or whatever you’ll just need to make sure your Photoshop Preferences in General – Image Interpolation and the option for Resampling when you resize your image are both set to Bibubic(smoother gradients). Literally is going to save me a lot of time and hard drive space, so if that’s a problem you have then there ya go, thanks Ben, you’re swell.

Thanks for taking the time to explain things in such great detail in a way that is easy to understand.

Stinking – A! I had 3 takeaways that are going to make a difference in my work – thank you!